How To Interpret Signs From The Universe 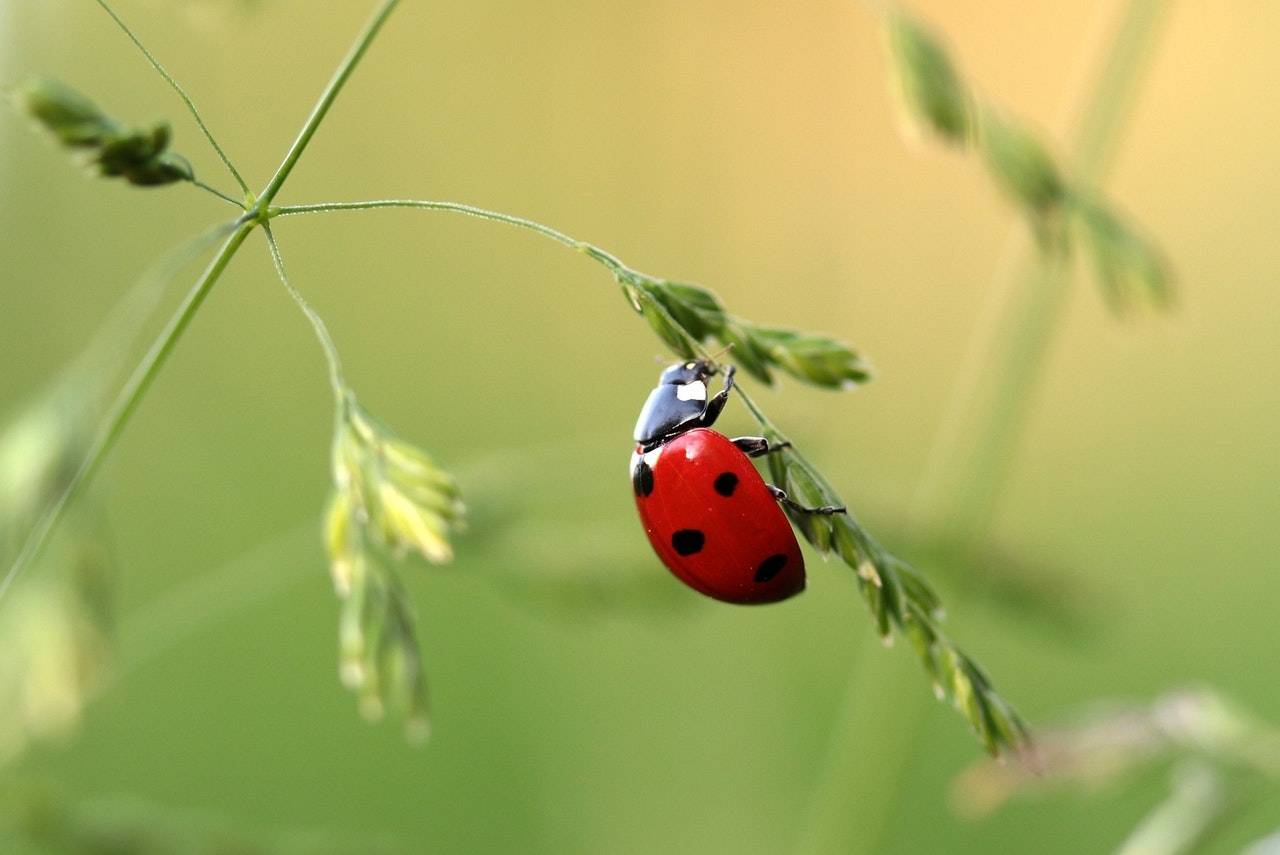 I found a tiny ladybug in my pre-rinsed and cut spinach a couple of months back. It was still alive and had survived a couple of days in the fridge and another rinse by me.
I had been going through some challenges in my career and was anxious about the changes I’d made, but when I saw the ladybug I knew I had made the right choices.

The ladybug is believed to be the embodiment of “Lady Luck”, bringing good luck, fortune and prosperity with it. And ladybugs always show up when I’m on the right path nowadays, without fail. It’s my sign from the universe that everything is going to be alright.

It began a few years back, one winter morning in February, after a freezing cold night in the north of Sweden.
When I woke up in the morning and opened my eyes I saw a ladybug sitting on my duvet! I had no idea how it had gotten there or even how it could have survived the winter cold! It felt like a small miracle and I got a feeling that someone wanted to send me a message of encouragement.
I was just attending the first day of a course that I had hesitated to enroll in, but when the ladybug appeared I knew it was the right choice to enroll. Eventually, a few years later, that course had changed my life completely!.

The same happened when two family members reunited after being apart for years: a ladybug flew right over the table in the dining room, just as we cut the cake to celebrate their reunion.

When I moved abroad last year I was both excited and scared. After a period of feeling disconnected from society, not yet understanding the culture or the language, I started to doubt my decision to leave my safe and stable home in Sweden for the unknown.

Then, on the first warm day of spring in my new apartment, I looked out from my kitchen window at the open atrium it overlooks.
In the dawning light, I could see tons of little bugs climbing up the walls. At first they scared me, until I realized that they were all ladybugs!There were hundreds of them being nested and born in my atrium, swarming around, bumping against walls and outdoor furniture while they were testing their flying skills.

They were drying their brand new spotted wings, turning them towards the warm sun, while resting on my plants, balcony table, and my one left behind flip flop. And although starting over is scary – with the blessings of hundreds of ladybugs, I thought: “Maybe everything will turn out fine after all?” 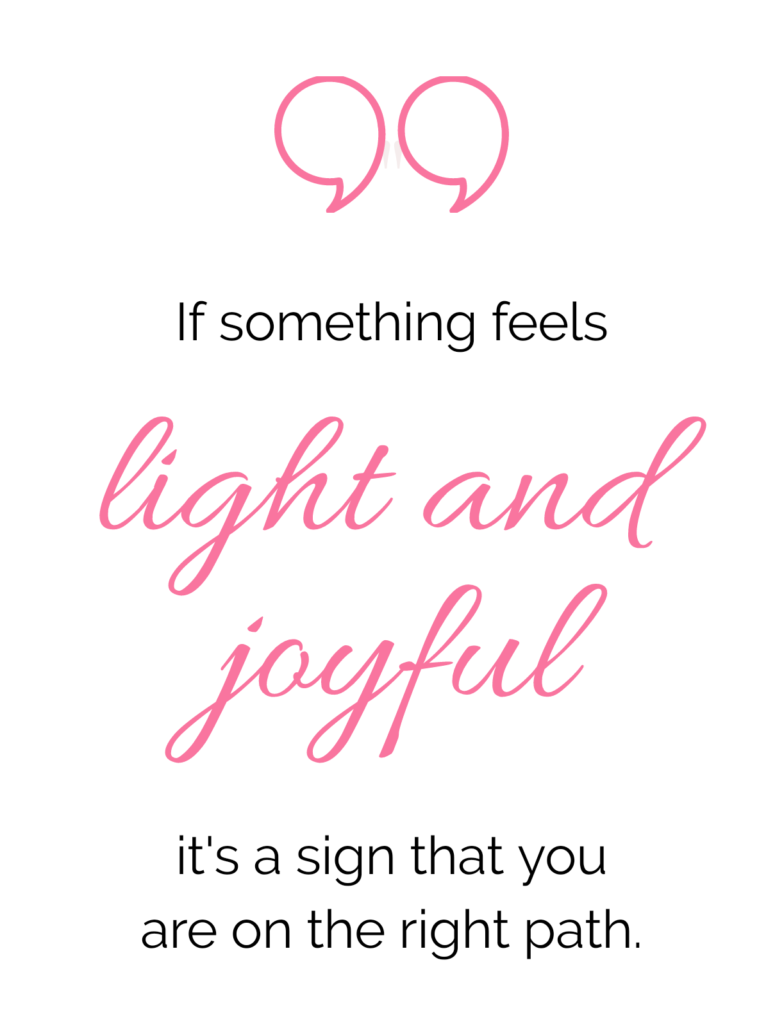 How to interpret signs from the Universe

Signs can appear in different ways, but here are a few of the most common.

We are all gifted with intuition, or “gut feeling” as some call it, and this is an excellent way to get intuitive signs that can help guide your way through life.

Physical pain is sometimes a sign that a situation is not right for us. When I was working in a stressful workplace, a paint shop, doing a job I didn’t really like, my first sign that I should be doing something else was an emotion. Every morning as I drove to work I felt as if my stomach was in knots.

When I ignored the emotional sign from the Universe, physical symptoms started to appear: I suddenly got an allergic reaction to the paint I was selling and my hands broke out with blistering, painful eczema.

When I still didn’t listen to the signs I suddenly got a totally unexplainable pain in my foot, making it unable for me to walk without crutches for seven weeks! The interesting thing was that not a single doctor could find anything wrong with my foot!
When I eventually quit my job the pain and eczema went away and have never reappeared since. 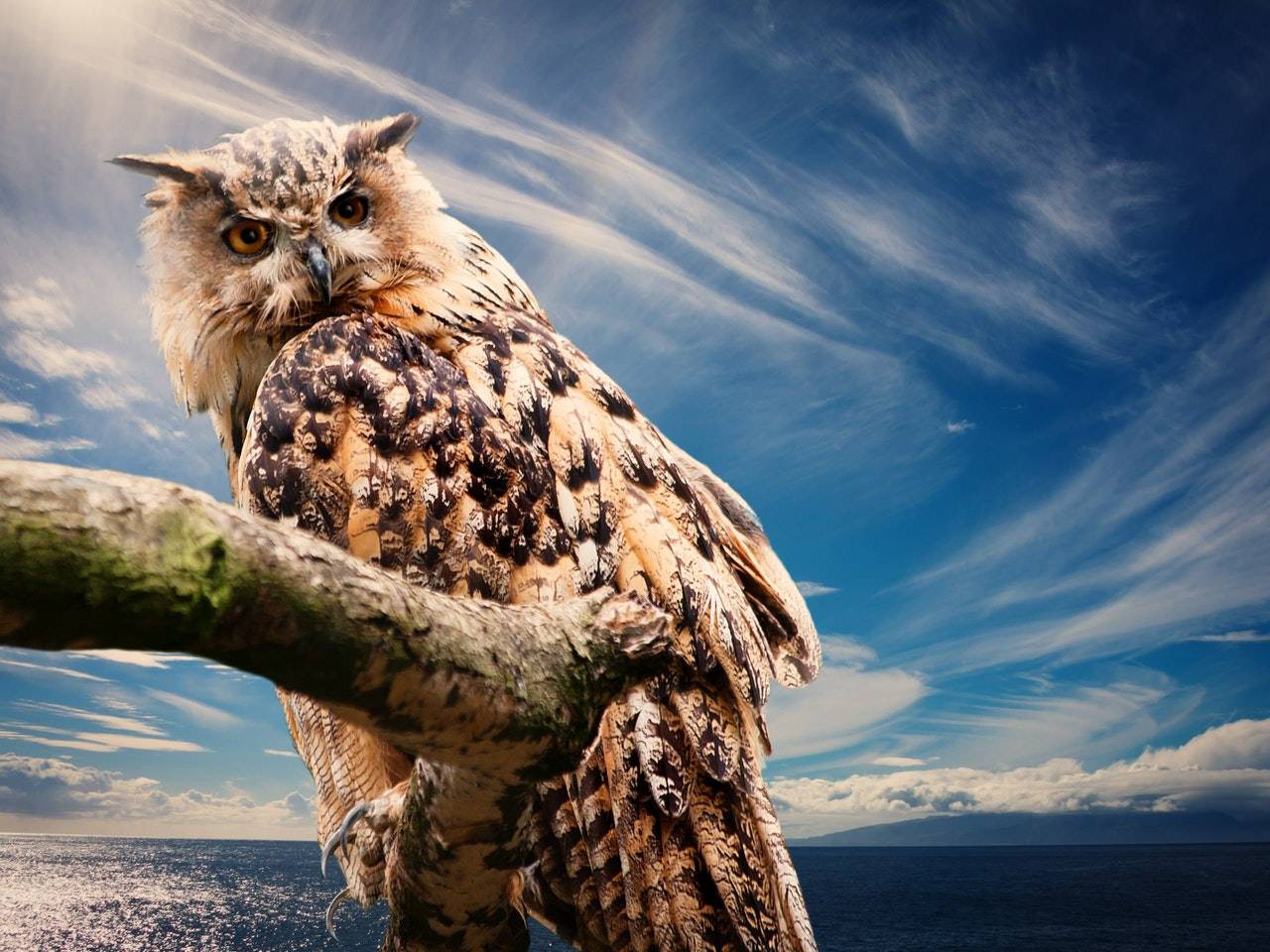 Gabrielle Bernstein, a famous spiritual author and speaker, often asks for signs from the Universe. Her special sign is an owl, and when an owl appears she knows she’s on the right path! The owl has at times appeared physically, but sometimes it has appeared as a large bumper sticker, in a dream, or in other ways.

Many people see birds as signs. One person, whose father had just passed away, had a bird sitting outside her window for a long time. She felt a calm and loving presence when she saw the bird and was certain that it was a sign from the Universe that her father was ok and still watching over her.
Butterflies and ladybugs have been signs of mine for years. Right after my mother passed away, a large, beautiful butterfly would fly around me in circles for several minutes as soon as I sat out on my terrace. I knew then that I was protected and guided, and that I had been given a sign that I was not alone.

During a period of my life, I did a lot of spiritual and personal development and was very active in learning the Law of Attraction and manifesting with gratitude.
The sign that appeared, telling me that my connection with the spirit world and my manifesting skills were improving, was little white feathers.
They suddenly started to appear everywhere!

When I opened the window in the morning, a little white feather drifted in and landed by my feet. When I was cooking in the kitchen, I found a small white feather on my countertop. When I was outside walking, a tiny, white feather landed on my shoulder.
I have never seen so many white feathers around me before or after that period in my life, and I know it was a sign that my spiritual practices were working, and a sign to continue letting spirituality into my life.

Other signs can be finding coins, like pennies and dimes. This is also a common sign from the Universe for many people. 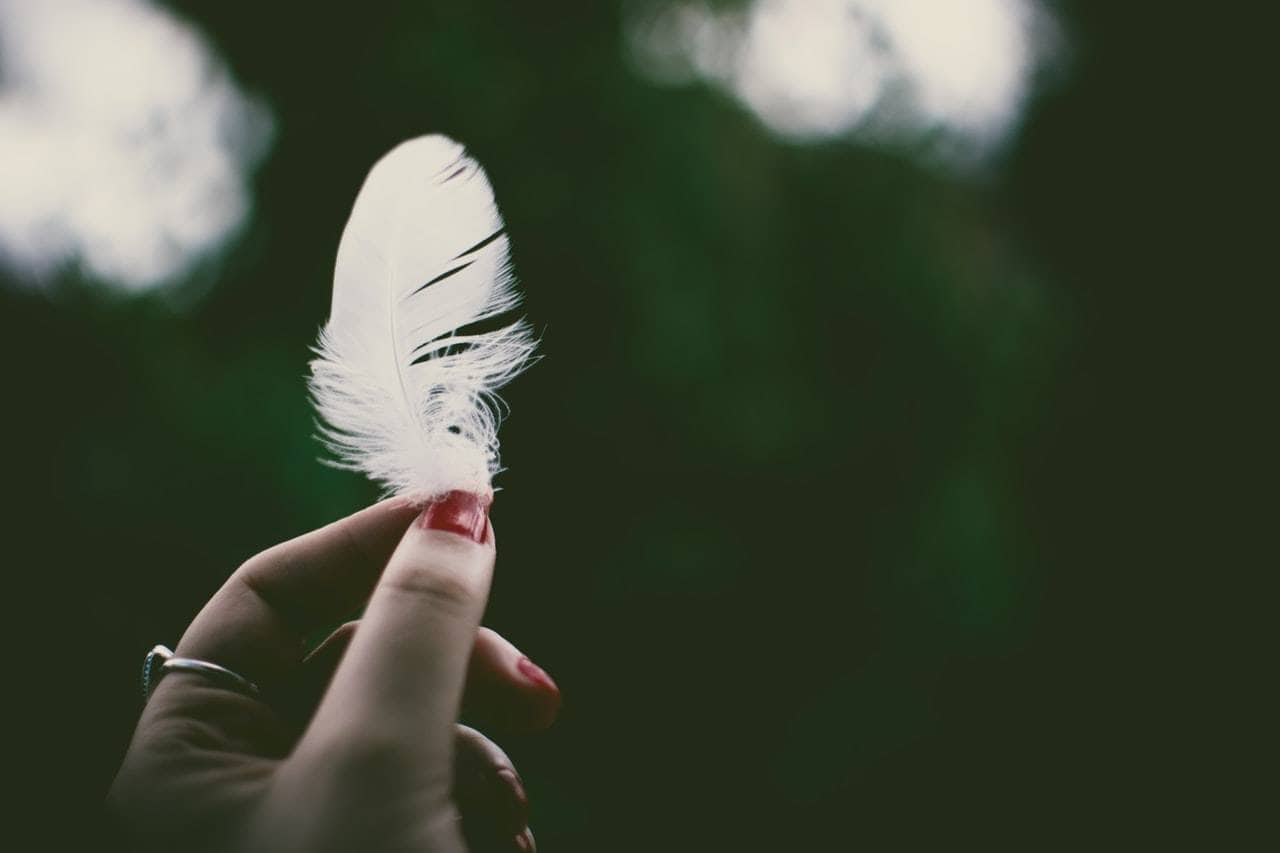 A sign that I always get when I am in the right flow of life is repeated numbers. For me, they appear on my watch. I know that when I catch 11:11, 12:12, 13:13 and so on during unusually many hours during the day, I’m in the right place at the right time, doing what I’m supposed to do.
Other people see repeated numbers on signs, license plates or other places, and sometimes they have a specific number, like “222” that is their specific sign that they are on the right path.

One summer, I woke up every day for weeks, by the sound of my doorbell. It was a distinct, loud ringing, and every time I rushed out of bed and opened the door, only to find that no one was there.

It was shortly after I had quit the job that made me physically ill, and I got an explanation of the phenomenon when I joined a class to evolve my spiritual abilities further. Others in the group had had the same experience as me! One had heard the phone ringing, but no one was there when she picked up, another had similar to me, been waking up from a knock on the door.

“It was a sign that you are being called to your higher purpose.” said our spiritual teacher, and once I had begun my spiritual journey, I was never awakened by the doorbell again – unless there was a real human standing on my porch, ringing it!
Some have specific songs as their sign from the Universe.

One woman had “Wake me up before you go go” as her specific sign, and when the song appeared on the radio, she knew that it was guidance.

When she got an unexpected job offer, she wasn’t sure if she should accept it or not, but when she got in her car and turned on the radio, guess what song was playing? “Wake me up before you go go!”! When she heard that, she knew that she should go ahead and accept the job offer!

Many times the signs from the Universe appear spontaneously, and I find that the more intuned and open I am to receiving them, the more signs appear.

If you want a sign from the Universe, the easiest way to get it is to simply just ask! Then let go of the outcome and just wait. It may be a day or two before you get your sign, but it will appear.

Gabby Bernstein had a hard time conceiving and during one afternoon when she was feeling particularly down, she closed her eyes and asked for a sign from the Universe to help her move forward.
When she opened her eyes, she saw two beautiful, wild turkeys walk across her lawn. Later, in meditation, she was guided to google the spiritual meaning of wild turkeys.

When the search results appeared on the screen, on the top of the list was “Fertility”! She had been given the sign she had asked for and knew that everything would turn out right eventually. The sign helped her get back into faith, and eventually she got pregnant and had a beautiful baby boy!

Summary; Signs From The Universe

There are many ways in which the Universe can give us signs, but in this article I have listed the six most common ways to get a sign from the Universe.

Physical pain can be a sign that something needs to change, that you need to do something about a situation.

Birds, ladybugs or butterflies appearing under special circumstances can be a sign from the Universe that something will turn out right, that we are guided and not alone. Other animals can be signs as well.

Objects that suddenly keep appearing unusually often, like little white feathers or pennies and dimes, may be a sign that you are on the right path and should continue on that path.

When you see repeated numbers unusually often, it is a sign that you are in flow, and to keep doing what you are doing.

Hearing a doorbell, a knock on the door or the phone ringing, but no one is there, can be a sign that you need to take action and step into your calling. A special song can be a sign, and when you hear it you know that you should go ahead with a situation. 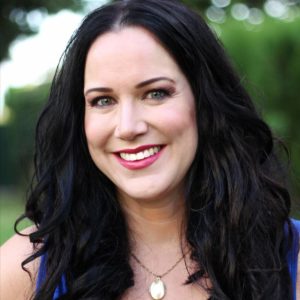 Elizabeth Lily is a Spiritual Life Coach, Reiki Master and teacher. She combines practical tools with spiritual principles and practices for optimal results. 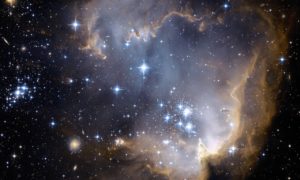 How To Interpret Signs From The Universe

I found a tiny ladybug in my pre-rinsed and cut spinach a couple of months back. It was still alive and had survived a couple

Don't Miss Out On Freebies & Other Goodies!

WEBSITE CREATION & DESIGN BY: LET US GROW YOUR BUSINESS